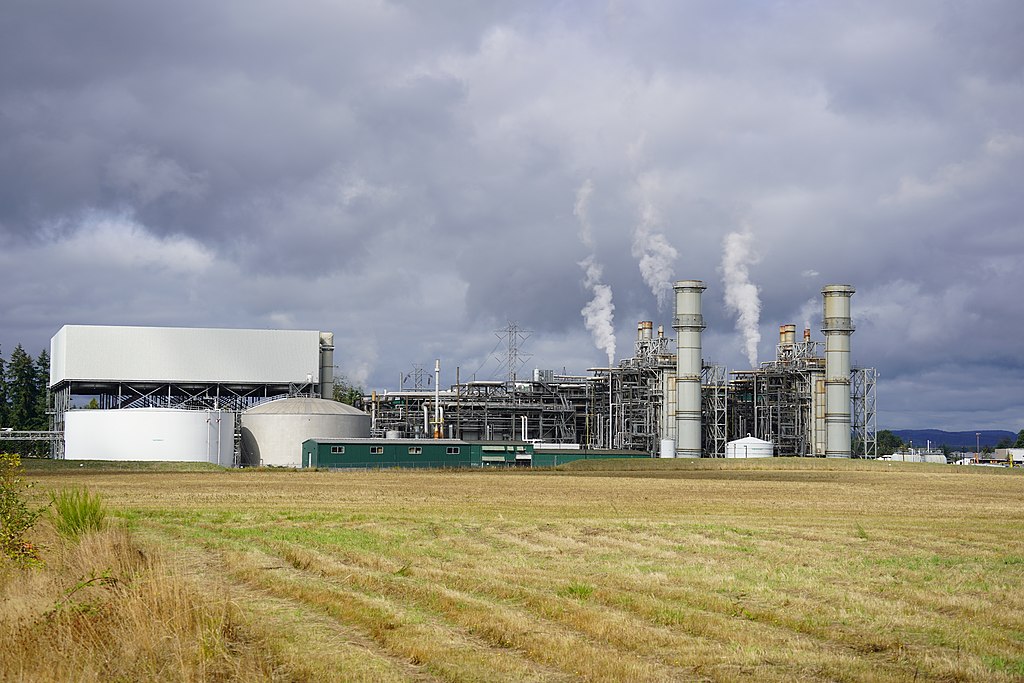 With the cancellation of the Perennial Wind Chaser power plant, scenes like this from the natural gas-fired Chehalis Generation Facility in Washington won’t be coming to Hermiston any time soon. Photo by Steven Baltakatei Sandoval/WikiMedia Commons

Not only did we stop another fossil fuel project in Oregon, but the termination of the site certificate (the key permit to build and operate a power plant) means that Perennial no longer has the option to sell the project. Additionally, since the Oregon legislature passed HB 2021, the 100% Clean Energy for All bill last year, the Energy Facility Siting Council is prohibited from allowing any new generation facility that produces power from fossil fuels.

Thanks to our clients, Columbia Riverkeeper and Friends of the Columbia Gorge, the developer of the Perennial Wind Chaser Station fracked gas power plant recently announced that it will terminate the project. If constructed, the plant would have emitted more than 1,000,000 tons of greenhouse gasses each year. A new Oregon law prohibits any new gas plants from being approved in the future.

This victory marks the end of new fracked gas energy in Oregon.

In 2021, confronted with mounting public pressure and litigation that Crag Law Center brought on behalf of Columbia Riverkeeper and Friends of the Columbia Gorge, the developer behind the controversial Perennial Wind Chaser Station, a 415-MW fracked gas power plant proposed in western Umatilla County, Oregon, announced—through its counsel—its intention to abandon its plans to build the project.

This is a huge win for Oregonians and the climate. Perennial would have locked the state into at least thirty years of additional climate-destroying pollution. The message is clear: our future is in clean energy, not dirty fossil fuels.

Crag Managing Attorney Maura Fahey worked on a team with the Law Office of Karl G. Anuta, and attorneys at Columbia Riverkeeper and Friends of Columbia Gorge to challenge the ill-conceived project.

If constructed, Perennial would have emitted more than one million tons of greenhouse gases per year, making it the sixth largest stationary source of greenhouse gas emissions in the state—a statistic that fails to account for the considerable climate impacts associated with the extraction of the fracked gas that would have supplied the plant (since most methane gas in the United States and in the Pacific Northwest is produced by fracking). Over the last decade, fracking has led to a significant increase in the amount of methane released into the atmosphere. On a short-term basis, methane is over 80% more impactful than carbon dioxide in causing climate change. The Perennial project also would have emitted up to 59 tons of particulate matter, 19 tons of sulfur dioxide, 111 tons of nitrogen oxides, 213 tons of carbon monoxide, 34 tons of volatile organic compounds, and six tons of sulfuric acid mist per year.

Just five years ago, several proposals for new gas-fired power plants threatened to harm air quality in the Columbia River Gorge and exacerbate climate change, but public opposition to each of these projects has prevailed. We hope and expect that Oregon’s future begins today, free of new fossil fuel power plants, which are dirty dinosaurs of a bygone era.

The end of fracked gas power plants in Oregon?

The Perennial project was the last of numerous proposals for new gas-fired power plants in Oregon that have been cancelled over the past five years, starting with the Troutdale Energy Center and South Dunes Power Plant in 2016, then PGE’s Carty Units 2 and 3 in 2018, and now Perennial in 2021. With the abandonment of Perennial, no proposals to build any new gas-fired power plants in Oregon remain pending with EFSC.

Shortly before Perennial’s September 23, 2020, deadline to start construction of the facility, the Oregon Department of Energy (ODOE) and Perennial together concocted what conservationists have called an illegal scheme to breathe new life into the otherwise dead proposal. As part of this scheme, ODOE unilaterally altered the previously approved construction schedule for the project and purported to waive numerous mandatory pre-construction conditions in the site certificate. ODOE did so without first obtaining approval for these changes from the Energy Facility Siting Council, as required by state law. ODOE then allowed Perennial to start work on a road and bridge at the site, despite Perennial’s noncompliance with the site certificate, including Perennial’s failure to obtain other required permits.

Shortly after, our clients – Columbia Riverkeeper and Friends of the Columbia Gorge – filed a Petition for Judicial Review against ODOE and Perennial in the Multnomah County Circuit Court, alleging that ODOE’s decisions violated state law. This case was pending when Perennial announced its intention to seek termination of the site certificate for this project. In September 2022, the Energy Facility Siting Council officially terminated the site certificate marking the end of new fracked gas in Oregon.

Crag Managing Attorney Maura Fahey represented the groups in this matter, along with the Law Office of Karl G. Anuta, and in-house counsel at Columbia Riverkeeper and Friends of the Columbia Gorge.

Learn more about Crag’s work on this case Friends of the Columbia Gorge is a conservation organization with more than 6,000 members dedicated to protecting, preserving, and stewarding the Columbia Gorge for future generations. Friends maintains an office in Portland, Oregon, as well as in two Gorge towns—Hood River, Oregon, and Washougal, Washington.
Read More