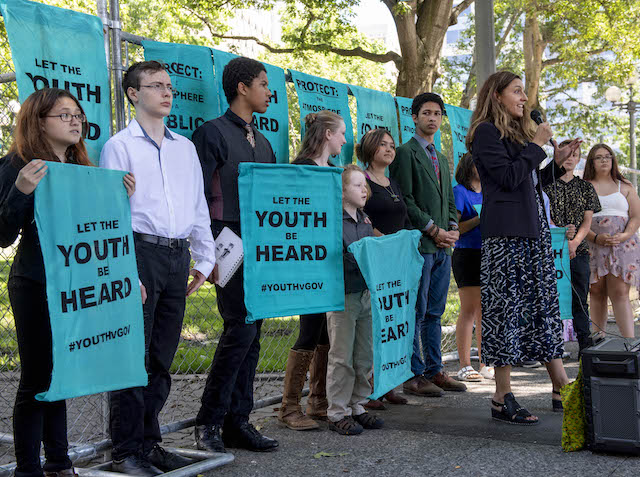 At the time they filed suit in 2018, the 13 youth plaintiffs were between the ages of 7 and 17.  As youth, the plaintiffs are particularly vulnerable to the impacts of climate change and will experience its increasing effects to a greater degree than today’s adults. Additionally, many of the youth plaintiffs cannot take part in the electoral process. This inability to defend their rights makes them particularly vulnerable and means their only way to redress their injuries is through judicial action. The defendants are the State of Washington, Governor Jay Inslee, and several state agencies including the state Department of Ecology and the state Department of Transportation.

The youth claim that state defendants have long-standing knowledge that carbon dioxide emissions—including those from Washington’s fossil fuel-based energy and transportation systems—cause climate change and endanger the youth plaintiffs’ health and safety. By continuing to permit transportation and energy projects that emit high levels of carbon dioxide, the defendants are violating the youth plaintiffs’ rights under the Public Trust Doctrine, the Due Process clause, and the Equal Protection clause of the Washington State Constitution. The plaintiffs ask the courts to declare their fundamental rights to life, liberty, and a healthful environment and to enforce a government-created plan to comprehensively address the climate crisis.

In support of the youth plaintiffs of Washington, we represent the League of Women Voters of Washington as amicus curiae, or friend of the court. The League’s support highlights the important role of the courts in protecting the rights of all people, especially young people who lack political power, and in acting as a check on the other branches of government.

In August 2018, the King County Superior Court granted the State’s motion to dismiss the case finding that: (1) the youth’s claims are “quintessentially political questions” inappropriate for judicial review, (2) there is no constitutional right to a healthful environment, and (3) the youth did not present an appropriate equal protection claim. The youth plaintiffs filed an appeal of the decision, but unfortunately, the Court of Appeals also ruled in favor of the state defendants, finding the plaintiffs have no fundamental right to a healthful environment, even though it is the only right the legislature has characterized as “fundamental and inalienable” under Washington law. In March 2021, the youth petitioned the Washington Supreme Court for review of the Court of Appeals’ decision. The League of Women Voters has filed supporting amicus briefs at every step. As of now, the youth are awaiting a ruling on their petition for review with the Washington Supreme Court.

In support of the youth plaintiffs of Washington, Crag represents the League of Women Voters of Washington as amicus curiae. The League works to ensure that the voices and interests of all individuals, particularly those underrepresented in government, are spoken and accounted for in political decision-making. At times, this means that the League will file amicus briefs where the political branches have failed to protect the rights of individuals, and the courts must be asked to step in to protect those rights.

For more information, here is a link to the Aji P. v. State page on the Our Children’s Trust Website.