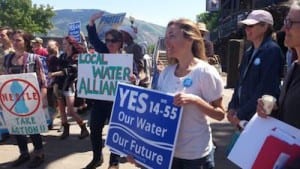 Measure 14-55 was put to a vote on May 17 in order to protect the water in Hood River County from large scale bottling corporations. The ballot initiative passed with 68% of residents voting “yes.” The battle against Nestlé’s proposal to bottle the water in Oxbow Springs has been ongoing for years, but this was a large victory in the eyes of supporters.

The water protection measure was filed in September by Local Water Alliance, a group of activists in Hood River County that gathered enough signatures to qualify a ballot initiative. Crag represented Local Water Alliance in defeating an early challenge to the measure after the County had initially rejected the group’s proposal.

The bottling production from Nestle is estimated to use over 238 million gallons of water a year from Oxbow Springs and other public water sources. The measure prohibits any operation from producing or transporting 1,000 gallons or more of bottled water a day for commercial sale within the county.

Although this victory is news worth celebrating, there is still more work to be done. The Oregon Department of Fish and Wildlife has rights to the water in Oxbow Springs and is proposing to exchange this water with the City of Cascade Locks, which is in full support of Nestlé’s proposal. If approved, this exchange will give Nestlé what it needs to go through with their proposal for bottling the water. Crag clients plan to continue to challenge the exchange and to seek protections for our public water resources.

“The people of Hood River County have spoken out against the privatization of our public water sources for private corporate gain, we are hopeful that Governor Brown and ODFW will respect the will of the people and suspend the water exchange process,” said Crag Attorney, Maura Fahey.

The vote on May 17 marks the first time a community has banned together to stop Nestlé and will hopefully be an example for other groups fighting this same battle in other communities.

“This is really a resounding victory for everyone who cares about protecting not only our water supply, but water supplies around the world,” said Aurora del Val, Local Water Alliance campaign director.

Although Nestlé will most likely try to fight the ballot initiative results, the voice from the voters was an important move to protecting Oregon water after droughts in previous years. Crag and our clients are committed to maintaining this victory and protecting water sources.

Despite the landslide election victory this May in Hood River County, Oregon state agencies are still proceeding with applications to make state public water available to Nestlé — in the very same county that overwhelmingly voted to kick Nestlé out.  Governor Brown made a step in the right direction earlier this year to stop a water rights swap that cut out an important public interest review. Now that Hood River County voters have spoken loud and clear, it seems only right that Governor Brown stays on track and tells her state agency, the Oregon Department of Fish and Wildlife, to retract its water exchange application intended only to make the state’s public water available to Nestlé.

Your voice matters!  Please join with our clients Food & Water Watch and take a moment to Tell Governor Brown to protect Oregon’s water from Nestlé!

Lindsey is a senior at Duke University studying environmental science and policy. She interned at Crag through a program called Duke Engage during the summer of 2016.