Where Are They Now? Alix Jacobson

Between earning a law degree, studying Water Resource Management, and interning at the Wisconsin Department of Natural Resources, former Crag intern Alix Jacobson was able to sit down to share her memories of her internship in 2011. 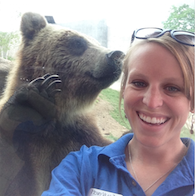 After leaving Crag, Alix graduated with distinction in 2012 having earned a degree in Biology with a concentration in Marine Biology, along with minors in Environmental Science and Classical Civilizations.  She completed an honors thesis on the population genetics of deep-sea hydrothermal vent invertebrates, and went on to co-author several similar papers at the Duke Marine Lab in Beaufort, NC.  She is now pursuing a dual degree (a J.D. and a Master’s degree in Water Resource Management) at UW-Madison.  Outside of her classes, she is a member of the Dane County Environmental Council and an intern for the water law attorneys at the Wisconsin Department of Natural Resources.

Crag Law Center gave Alix the perfect opportunity to see environmental law at work protecting the earth’s natural resources, including clean water.  “At Crag I learned that we need to protect our natural resources because oftentimes they cannot protect themselves.”  Alix’s work confirmed her desire to go to law school and pursue environmental law.  Crag’s other interns supported Alix in her pursuit of a law degree; two of them even called her the night before her first day of law school to wish her luck and assure her that she was ready.  At Crag, Alix gained lasting friendships as well as legal knowledge and experience.  Together the interns learned how to work as a team and solve problems together that could not be solved by one person alone.

Alix spends her free time volunteering every week at Henry Vilas Zoo, where she can share her love of the natural world with the public.  She also loves SCUBA diving: her favorite dive was on a sunken German submarine off the coast of North Carolina.  She loves attending Wisconsin badger hockey games, Packer football games, and watching Duke Basketball on tv.  She also enjoys helping her parents raise chickens in their backyard.  Most of all she loves being back in her home state of Wisconsin: there’s nothing better than enjoying good beer and great cheese with her family!

McKenna Ganz is a pre-law junior at Duke University.  She interned with the Crag Law Center in the summer of 2015 as part of the Duke Engage Portland program. She is majoring in Global Culture, Media, and Political Conflict with minors in Economics and Global Health.