Where are they Now? Joe Terrenzio

In our new series “Where are they Now,” we will be taking a look at some of Crag’s previous interns and volunteers to see what they’re doing now and how Crag helped shape their futures.  In this installment, we talked to Joe Terrenzio, who interned with the Crag Law Center in late 2010. 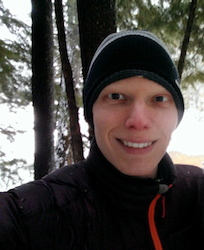 Originally working with the Gifford Pinchot Task Force on the Wildcat Timber Sale, Joe moved over to Crag when they were brought in to help with the appeal in federal court.  During his time with Crag, Joe worked under Ralph Bloemers, who taught him many valuable skills concerning legal writing, such as really focusing on the issue at hand and being attentive to how you frame and present your case.  In addition, his time at Crag taught him the importance of knowing all the facts and being confident in your position before presenting a case.

“Working for Crag was a valuable life experience building key career skills, gave me important perspective on environmental protection issues, and introduced me to an amazing community of like-minded advocates.”

After leaving Crag and graduating from Lewis and Clark Law School, Joe was offered a position running the Philip C. Jessup International Law Moot Court Competition for the International Law Students Association in Chicago.  There, he focused mainly on the global administration of the competition, which included working to develop the problem, writing the bench memorandum, and supervising local administrators in competitions around the world.  He also helped to run the World Championship International Rounds.  Joe remained in Chicago with the competition for three years before moving back to the Portland area.

Joe plans to start up again as an environmental attorney in the area.  His time at Crag helped inspire him to move back to Portland – he said that being able to see an immediate, direct impact of your work, like the team at Crag often does, really gives satisfaction to your work:  “Win or lose, working on environmental issues reinforces the importance of your work and inspires you to keep going.”

He also greatly enjoys being able to establish a personal connection to the work he’s doing: “It’s nice to be able to get outside and say, ‘these are the actual trees we’re trying to protect from being cut down.’”

Ideally, Joe would like to be working at a place that allows him to go to court to directly advocate for things he cares about, but also be in a position to do collaborative work with other organizations and be able to affect long-term policy changes.  He is especially passionate about carnivore introduction in the area and around the country, and believes it is a very important and diverse topic that merits much discussion.

Erin Elliott is a rising junior at Duke University working with the Crag Law Center for the summer as part of the DukeEngage Portland program.  She is majoring in biology with a minor in environmental science and policy.