Where Are They Now? Megan Gleason 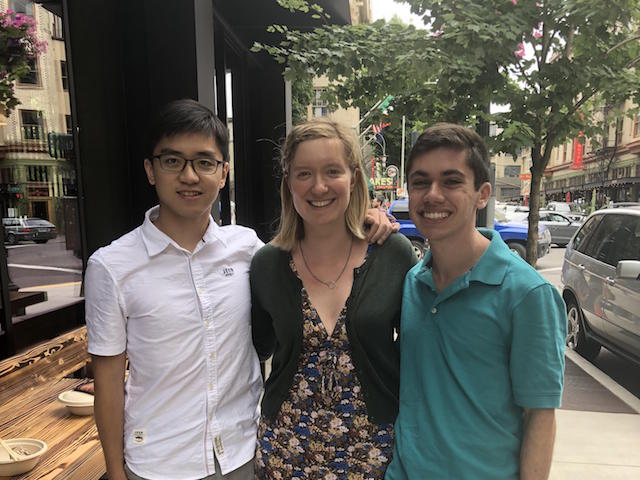 In this edition of Where Are They Now, we interviewed Megan Gleason, a Development Assistant with Crag in 2015. She is currently an Assistant Project Lead at Winning Mark, a progressive political communications firm in Portland. Megan continues to support Crag as a volunteer.

Megan Gleason, an avid supporter of Crag, has been interested in environmental issues for over a decade. While studying at the University of Oregon, she volunteered at Our Children’s Trust (OCT), a youth climate advocacy organization. Crag is partnering with OCT in a youth climate lawsuit against the State of Oregon for its failure to safeguard the atmosphere for future generations.  It was this case that initially connected Megan to Crag’s work and eventually led her to come on board as a temporary Development Assistant in 2015. She then transitioned to the political realm; working for a State Senator in Salem, supporting his campaign for Oregon Secretary of State, and then in Portland City Hall. For the past six months, Megan has been an Assistant Project Lead at Winning Mark, a communications firm supporting campaigns for progressive candidates and ballot measures across the country.

All the way back in 8th grade, Megan remembers learning about the dangers posed by climate change. After participating in a constitutional law program during high school, Megan decided to attend the University of Oregon to major in Environmental Studies and minor in Political Science. In college, she learned about Our Children’s Trust, an organization elevating the voice of youth to secure the legal right to a stable climate and healthy atmosphere for the benefit of all present and future generations. She became a volunteer with OCT, appreciating the work of “elevating young people’s voices.”

During her senior year, Megan did her senior thesis on the Oregon Youth Climate Case, litigation in which Crag is representing two youth in challenging the State of Oregon exacerbating the effects of climate change. Megan was impressed that Crag and OCT were the “only groups making the constitutional argument that the government has a public trust obligation” to protect the climate. Megan continues to support OCT today as a volunteer board member.

Chris Winter and Courtney Johnson, staff attorneys at Crag, got to know Megan during her research on the case. After graduation, Megan decided to “Google all of the places I love and see if they need help.” Eventually, this led to Megan becoming a temporary Development Assistant at Crag, helping out with the busy end of year fundraising. She said that her work focused on helping with email communications, organizing donor information, and sending thank you cards to supporters. Megan said it was “nice to find a group that tackles problems holistically.” She appreciated the various aspects of Crag’s work.

“While working with Crag’s development team, I learned valuable skills that are necessary for small nonprofits to thrive, from communications, development, to staying organized. But I especially appreciated being surrounded by the dedicated, driven people who are fighting day in and out to protect our environment.” -Megan Gleason, Development Assistant 2015

Megan’s work after college was inspired by opportunities that arose, and after college, she was hired to join a State Senator’s staff in Salem. The experience helped her develop an understanding of the Oregon State Legislature, knowledge she continues to leverage. After the legislative session ended, Megan decided to return to local policy, taking a position in Portland City Hall as the Constituent Relations Coordinator for City Commissioner Steve Novick.

After working on the legislative side of issues in Salem and City Hall, she joined the campaign world. She decided to take a job with Winning Mark, an ad agency and political consulting firm in town, and began taking her passion for progressive advocacy in a new direction. While producing campaign communications supporting progressive initiatives on the ballot or candidates, she continues to learn how systems work and learn new skills that she hopes to apply to help combat climate change.

Megan talked about the importance of making connections as you build your career. Looking back, Megan shared that “it’s really helpful to be connected to the environmental groups you care about.” Offering advice for rising young professionals, she gave some advice she realized while at Crag: “learn how to best help a cause” and try to “understand the systems” you’re working in.

“It’s not just the big things Crag does – taking Nestle to court or representing youth plaintiffs in atmospheric trust litigation – but the little things that bring the community behind an issue that makes them so successful.” -Megan Gleason, Development Assistant 2015