Where Are They Now? Perrin de Jong

In this installment of “Where Are They Now,” we feature former Crag intern Perrin de Jong, who was a Summer Associate in 2007. 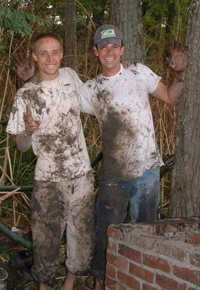 Perrin entered Lewis & Clark Law School in Portland, Oregon, after he received his BA in sociology from Berea College in Kentucky. In his second year at Lewis & Clark, he interned here at Crag Law Center. “Crag set me up with a great deal of phenomenal work experience in public interest environmental litigation,” he said recently.

Much like the Biblical David in his fight against the giant Goliath, Perrin worked with Crag attorneys on behalf of small groups of stakeholders taking on giant corporations and the federal bureaucracy. For example, Perrin worked on behalf of Native Inupiat communities in the North Slope region of Alaska, in their ongoing fight to halt Shell Oil’s drilling in their territory. Closer to home, Perrin worked with Crag attorneys on the Rosemere Neighborhood Association’s case against the US Environmental Protection Agency (EPA), in the neighborhood’s efforts to secure improvements to its sewer and wastewater systems. As a result of the Rosemere case, the EPA’s Office of Civil Rights was ordered to undergo significant reforms. Perrin was also involved in Crag’s efforts to curb logging on national forest lands.

Building on his experience in environmental justice, Perrin returned to Kentucky in his early years as a practicing attorney and participated in litigation that prevented a proposed coal-fired power plant (the largest such plant proposed in decades) from going online in Clark County, Kentucky, in 2010. In 2011, Perrin and a colleague founded the Appalachian Public Interest Environmental Law (APIEL) Conference, which is now in its fourth year at the University of Tennessee, Knoxville.  APIEL was designed to be an East Coast counterpart to the Public Interest Environmental Law Conference (PIEL) held at the University of Oregon’s School of Law. APIEL has now become an important hub for public interest environmental law work for activists, attorneys, and academics in the Appalachian region.

Perrin now operates a solo private practice in Asheville, North Carolina. Although a large part of his practice is criminal defense, he also engages in consumer protection and employee protection law, and offers pro bono legal consulting for environmental activists in the area. He was recently retained by private landowners to sue the U.S. Forest Service in the Western District of North Carolina federal court over the agency’s attempt to build a new shooting range in the Nantahala National Forest in Western North Carolina. As his practice grows, he hopes to become involved in more environmental litigation on his home turf in the Southeast.

Sean Galvin is a student at University of Portland.  While volunteering for Crag, he interviewed Perrin de Jong.  Using his original interview, communications  volunteer Beth Keegan wrote the final narrative.