Currently, the rezone has been approved by the Klickitat County Planning Department and it is now awaiting approval by the County Board of Commissioners.  If the County Commissioners approve it, local citizens and conservation groups may appeal the matter to Washington Superior Court.

In October of 2011, the County planning department issued a Mitigated Determination of Non-Significance (“MDNS”) and found as a threshold matter that the proposed rezone determination was not likely to have a significant effect on the water quality, water quantity, wildlife and other natural resources enjoyed by the public and private landowners under the State Environmental Policy Act.

The affected lands and waters found in the White Salmon River valley are remarkable.  The water is enjoyed by tens of thousands of people annually and relied upon by local residents for their drinking water.  The area boasts the Wild & Scenic White Salmon River and its “outstandingly remarkable values” include wild fish, world class white water boating, a rich heritage of Native American cultural sites and unique hydrogeology of cold water springs that feed the river.  The planning area contains prime and unique farmlands that are of statewide significance and numerous Washington Department of Fish and Wildlife (“WDFW”) designated “priority habitats.” 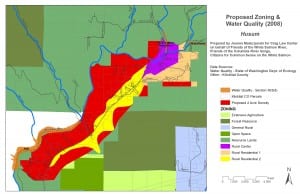 This map shows in red the lands along the river which are proposed to be rezoned to 2-acre density, which is 10 times the density of what current zoning allows on this rural resource land.

According to a top expert in the field, Mark Yinger, the water in the White Salmon River, in its tributaries, and in the leaky, inter-connected aquifers are vulnerable to increased levels of uncoordinated new development which will rely heavily on new groundwater wells spread out across the landscape.  Download Mark Yinger Technical Memorandum to Department of Ecology

For some time now the Klickitat County planning department has tried to amend the Sub-Area Plan and zoning code to allow a significant increase in the nature and location of development which responsible agencies and individual property owners have opposed because of the significant impact on the natural resources and livability of the lands in the White Salmon River valley.

Back in 2007, the Klickitat County Planning Department issued a Determination of Non-significance for a significant rezone of over one thousand acres of land to 2-acre lots through the Husum/BZ Corner Sub-Area Plan Update (County File No. SEP2007-12, the “2007 Update”).  The Planning Commission approved the proposed update and rezone.  The County received numerous comments from multiple agencies, the public, and conservation groups.  Subsequently the County issued a DNS for a proposal by SDS Lumber Co. to rezone over 100 acres of the same Sub-Area from Resource Land to 1-acre minimum lot sizes.

The County received substantial comments from the public and state agencies and the decision of the Planning Commission was appealed by the Friends of the White Salmon River and the Yakama Nation.

The County’s 2010 MDNS relies heavily on a report produced by Aspect Consulting (the “Aspect report”) which presents an analysis of possible water quality and water quantity impacts of the Sub-Area Plan and mitigation.  The Aspect report contrasts forecasts of a hypothetical full build-out under existing zoning and under the proposed zoning. Based on its hypothetical projections, the Aspect report attempts an analysis of the impact on water quality and quantity and suggests it will be about the same because the total number of residential dwellings under the existing zoning and the proposed zoning.

The County received substantial comments from agencies, the public, and conservation groups which pointed out problems with the County’s MDNS.  For example, the County’s MDNS did not address the impacts of the rezoning on wildlife, as required by the County Commissioners, or the specific criticisms or recommendations submitted by the WDFW or the United States Forest Service in extensive comments dating back several years.

The County never obtained a peer review of the Aspect report or addressed the significant criticisms of the report identified by the Forest Service.  While the County identified the future removal of Condit Dam as being foreseeable, it did address the significant change in the existing condition caused by the removal of Condit Dam and Northwestern Lake.  The removal of Condit Dam is significant for a number of reasons. First, the lower section of the river is now full of sediments and the long process of recovery is just beginning. Second, numerous threatened and endangered fish species now have access to the White Salmon River and its tributaries within the planning area.  Third, the removal of Northwestern Lake has dramatically changed the water table and is having a significant effect on groundwater on adjacent lands.

Mark Yinger’s report underscores what the County has not disclosed, considered or analyzed in terms of the direct, indirect and cumulatively significant changes that will result in terms of new wells, new septic drainfields on the tributaries, seeps and springs along the White Salmon River.