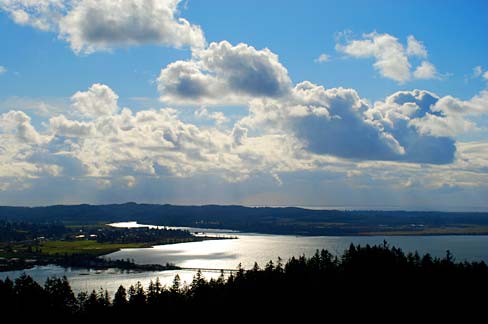 Today, the Oregon Court of Appeals handed down another decision reversing and remanding a Measure 49 vested rights determination.  Today’s opinion reversed Clatsop County’s decision finding that Beverly and Gary Aspmo had proceeded far enough with their development of a 30-lot residential subdivision overlooking Youngs Bay (sought pursuant to a Measure 37 waiver) to be allowed to complete the development even after Measure 49 had passed.  Part of the vested rights analysis looks at whether the amount spent towards completing the project was substantial as compared to the total cost to complete the development sought to be vested, and whether those expenditures were adaptable to other lawful uses of the land.

The Court of Appeals has decided several Measure 49 vested rights appeals now, beginning with Friends of Yamhill County v. Board of Commissioners of Yamhill County, in which Crag Staff Attorney Ralph Bloemers represented neighbors seeking to protect their property values and quality of life from excessive development under Measure 37 waivers.  That case is currently under review with the Oregon Supreme Court.  You can listen to OPB’s recent story on the case, ‘Ghosts of Measure 37’ Still Haunt Rural Oregon here.  Today’s decision built upon Friends of Yamhill County and other vested rights decisions handed down by the Court in recent months.

Crag Staff Attorney Courtney Johnson represented Oregon Shores Conservation Coalition in challenging the Clatsop County vesting determination.  In finding that the applicants had established a vested right to complete the subdivision, the County relied on cost estimates to build homes that were only about half the size of the homes proposed during the land use process.  Crag’s argument was quoted by the Court of Appeals in its decision today:

“The approach taken by the county and accepted by the reviewing court sets up a standard allowing the Aspmos to present an after the fact lowball figure for a total project cost in order to create the appearance of greater expenditures incurred.  Creating a lower denominator after December 6, 2007, in order to artificially elevate the ratio of expenditures incurred skews the vesting analysis in a manner that is inconsistent with the common law.”

The Court determined that the the county and the reviewing Clastop County Circuit Court did not assess the total project cost of the development that the Aspmos sought to vest as of December 6, 2007 (the date that Measure 49 became effective).  The Court concluded “[t]hat legal error requires reversal.”  The Court also found that on remand, the Clatsop court must address the issue of whether there was substantial evidence to support a finding that the Aspmos’ expenditures were not adaptable to other allowable uses, such as the 1-3 homesites allowed under Measure 49.  You can read the Court’s entire decision here.

This case represents another step towards seeing Measure 49 implemented as the voters of Oregon intended and upholding the state’s land use system to ensure our farm and forestlands and water resources are protected for future generations of Oregonians.